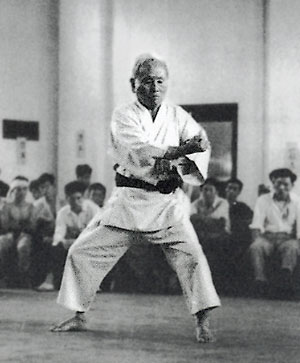 Karate was introduced into Japan in the 1920’s by Funakoshi Gichin Sensei but prior to that time many different styles of karate were practised widely in Okinawa  dating back many hundreds of years. These styles differed quite often because of location and their practice then would look somewhat different to what we practice in modern day karate.

Essentially there were 4 main styles of karate developed in Japan after its introduction – Shotokan, Wado-ryu, Shito-ryu and Goju-ryu – and of these, Shotokan is the most globally practised style due to a deliberate initiative to propagate its practice post World War II by Sensei Masatoshi Nakayama of the Japan Karate Association. Each of theses styles of karate has some characteristics that sets them aside from each other and Shotokan karate is recognised by it’s long range techniques using generally deeper stances than other styles combined with explosive speed and powerful techniques and is regarded as a very dynamic style that also develops good anaerobic capacity in its practitioners.

In essence, contemporary Shotokan karate is characterised by linear movements delivered with power and precision, accompanied by a focus of energy and an understanding of the body’s vital points. All these factors combine to make a powerful and comprehensive system for combat or self defence.

The World Shotokan Karate-do Federation embraces all these characteristics in its training however we go one step further. Our International Chief Instructor and founder, Sensei Hitoshi Kasuya, himself a former graduate of the rigorous JKA instructor’s course, has added a new dimension to the karate we practice that involves the use of rotational dynamics and fast, practical spinning techniques. These movements involve directional shifts that prior to Kasuya Sensei’s innovations, were unheard of in most modern forms of karate. They supplement our use of standard linear techniques and project our karate to a different level. The resultant effect is increased agility, better balance and quite simply, it gives the practitioner a wider range of options both in attack and defence. 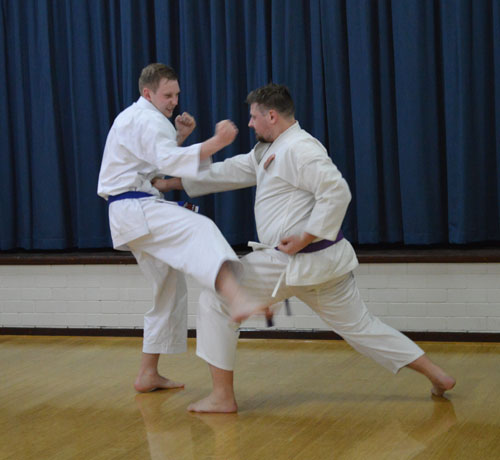 Kihon (basics) provide the backbone of our karate. As the name implies, it simply the perfection of individual techniques, or techniques in combination, to lay a solid foundation for further development.

Kata (pre-arranged sequence of movements and techniques) are a vital element of our karate training. Kata are performed in solo and follow strict sequences done at full combat speed.

Kumite (sparring) is the third element of karate training and takes on many forms from basic five step attack / defence moves through to one step sparring and then progressing to pre-arranged free fighting (jyu ippon kumite) and then free sparring with a partner (jyu kumite). Over the last fifty years, has developed not only as a budo style in the dojo, but also progressed to be a spectacular sport, or competition, karate and in fact will be introduced as this in the 2020 Olympics in Tokyo.

These 3 vital elements of our training are intertwined and because of this they are diligently practised in all WSKF dojo in Australia.

The organisation of WSKF in Australia follows along a very traditional path and our philosophy of training is simply to teach a high standard of technical karate and not to deviate from Shotokan principles. Our karate is not one of “instant gratification” that seems so prevalent in today’s world.  We take a longer term view with our training and adhere closely to the philosophy of the international head of WSKF, Sensei Hitoshi Kasuya who, in turn, has brought our style of Shotokan closer to the original karate principles promulgated by the founder of Shotokan Karate, Sensei Gichin Funakoshi.