The Twenty Precepts of Karate-do

Funakoshi Gichin Sensei, the founder of modern day karate, left a number of legacies when he passed away in 1957. More detail of his life can be found HERE and one strong legacy that really underpins the training for all Shotokan practitioners is Funakoshi Sensei’s philosophies of karate training referred to as “niju kun” or “twenty principles” . . . The Twenty Precepts of Karate-do. Funakoshi Sensei formalised these in 1938 in a publication called The Twenty Guiding Principles of Karate. In this publication, Funakoshi Sensei lays out specific rules by which karate students are urged to abide in an effort to “become better human beings”

Funakoshi Sensei was inspired to pen these concepts by his instructor Anko Itosu(1832–1915) who, in 1908, wrote to the Japanese government outlining his views on karate explaining why he felt karate should be introduced to the Okinawan school system. It’s worth noting that at this time, karate was coming out of the shadows in Okinawa because for the previous 300 years, its practice had been outlawed by the Japanese government and knowledge of it was minimal. Anko Itosu’s ten principles detailed in this letter are translated as follows:

1. Karate is not merely practised for your own benefit; it can be used to protect one’s family or master. It is not intended to be used against a single assailant but instead as a way of avoiding injury by using the hands and feet should one by any chance be confronted by a villain or ruffian.
2. The purpose of karate is to make the muscles and bones as hard as rock and to use the hands and legs as spears. If children were to begin training naturally in military prowess while in elementary school, then they would be well suited for military service. Remember the words attributed to the Duke of Wellington after he defeated Napoleon; “Today’s battle was won on the playing fields of our schools”.
3. Karate cannot be quickly learned. Like a slow moving bull, it eventually travels a thousand leagues. If one trains diligently for one or two hours every day, then in three or four years one will see a change in physique. Those who train in this fashion will discover the deeper principles of karate. 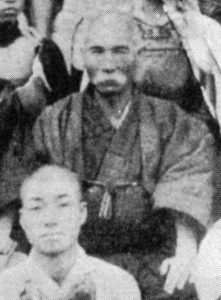 4. In karate, training of the hands and feet are important, so you should train thoroughly with a sheaf of straw (makiwara). In order to do this, drop your shoulders, open your lungs, muster your strength, grip the floor with your feet, and concentrate your energy into your lower abdomen. Practice using each arm one to two hundred times each day.
5. When you practice the stances of karate, be sure to keep your back straight, lower your shoulders, put strength in your legs, stand firmly, and drop your energy into your lower abdomen.
6. Practice each of the techniques of karate repeatedly. Learn the explanations of every technique well, and decide when and in what manner to apply them when needed. Enter, counter, withdraw is the rule for torite (restraining or escaping from an assailant).
7. You must decide if karate is for your health or to aid your duty.
8. When you train, do so as if on the battlefield. Your eyes should glare, shoulders drop, and body harden. You should always train with intensity and spirit as if actually facing the enemy, and in this way you will naturally be ready.
9. If you use up your strength to excess in karate training, this will cause you to lose the energy in your lower abdomen and will be harmful to your body. Your face and eyes will turn red. Be careful to control your training.
10. In the past, many masters of karate have enjoyed long lives. Karate aids in developing the bones and muscles. It helps the digestion as well as the circulation. If karate should be introduced, beginning in the elementary schools, then we will produce many men each capable of defeating ten assailants.

The Twenty Precepts of Karate-do

This document from Anko Itosu is an important historical one for karate and gives a good insight into the philosophy behind the teaching of karate at the time and so at the age of 70, Funakoshi Sensei used these concepts to formalise his “niju kun” (twenty precepts) and they are as follows (in Japanese along with the translations in English):

1. Karate-do wa rei ni hajimari, rei ni owaru koto o wasuruna
Karate-do begins and ends with rei (bow, courtesy)
2. Karate ni sente nashi
There is no first attack in karate
3. Karate wa gi no tasuke
Karate is a great assistance (an aid) to justice
4. Mazu jiko o shire, shikoshite tao o shire
Know yourself first, before you know others
5. Gijutsu yori shinjutsu
Spirit before technique (spirit is more important than technique)
6. Kokoro wa hanatan koto o yosu
Always be ready to release your mind
7. Wazawai wa getai ni shozu
Misfortunes arise out of negligence (laziness)
8. Dojo nomino karate to omou na.
Do not think karate training is only in the dojo
9. Karate no shugyo wa issho de aru
You will never stop learning in karate
10. Arai-yuru mono o karate-ka seyo, soko ni myo-mi ari
Put your everyday living into karate (put karate into everything you do) and you will find “myo” (the subtle secrets, the ideal state of existence, exquisite beauty)
11. Karate wa yu no goto shi taezu natsudo o ataezareba moto no mizu ni kaeru
Karate is like boiling water. If not given heat, it will go cold
12. Katsu kangae wa motsu na makenu kangae wa hitsuyo
Do not think of winning. Instead, think that you must never lose
13. Tekki ni yotte tenka seyo
Victory depends on your ability to distinguish vulnerable points from invulnerable ones
14. Tattakai wa kyo-jitsu no soju ikan ni ari
The outcome of a fight depends on how you handle weaknesses and strengths
15. Hito no te ashi wo ken to omoe
Think of hands and feet as swords
16. Danshi mon o izureba hyakuman no tekki ari
When you step outside your own gate, you face a million enemies
17. Kamae wa shoshinsha ni ato wa shizentai
Beginners must master low stance and posture, natural body positions are for the advanced
18. Kata wa tadashiku jissen wa betsumono
Practicing a kata exactly is one thing, engaging in a real fight is another
19. Chikara no kyojaku, karada no shinshuku, waza no kankyu wo wasaruna
Do not forget to correctly apply light and heavy application of power, expansion and contraction of the body, and slowness and speed of techniques
20. Tsune ni shinen kufu seyo
Think of ways to apply these precepts every day

Funakoshi Sensei wrote the twenty precepts of karate-do to assist karate students transform their art into a way of life. Each precept can be analysed in depth as they have a superficial meaning as well as a deeper truth that could take many years to understand. Also, translations into English can vary somewhat as the real meanings may not be well understood by non-Japanese but if nothing else, these Twenty Precepts of Karate-do are thought provoking and inspiring.