WSKF in Australia is directly affiliated to the WKSF in Japan and has been so for over 20 years. The International Chief Instructor of WSKF Japan is Sensei Hitoshi Kasuya 8th Dan and on the 1st June 1990 Kasuya Sensei formed the WSKF with the following declaration:

We, Karate exponents, training in the art of World Shotokan, firmly reject all forms ofprejudiceand discrimination. We hold no position on religion or politics and recognise each individual and each separate organisation as self determining entities. We seek the growth and development of World Shotokan and through that the development of world peace. It is our firm decision to found our art as a modern and permanent one, firmly rooted in friendship and understanding between all human beings on the planet. We seek the development and growth of a world youth and health movement based on mutual understanding between all federated member organisations. Under these guiding principles we hereby organise and found The World Shotokan Karate-Do Federation 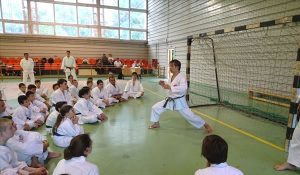 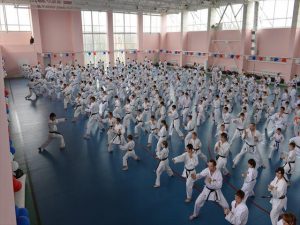 F was set up with a small number of affiliates but now has grown to over 92 member countries and Kasuya Sensei spends a good part of every year travelling to many of these countries to conduct training seminars and maintain a consistent karate standard throughout the organisation.

We are proud to be a member of the World Shotokan Karate-do Federation and our Australian members benefit greatly from this connection. Our Japanese karate lineage is strong and as far as possible our technical standards are aligned to those of the rest of the WSKF community around the world. Every 2 years WSKF holds it’s International Seminar and World Championships in Tokyo and all Australian members are able to attend and train with other WSKF students from around the world as well as qualify for participation in the competition. As well, all grading ranks issued by WSKF in Australia are recognised by WSKF clubs internationally and indeed, other mainstream Shotokan organisations in Australia and overseas are increasingly recognising our ranks.

A list (not comprehensive) of many countries around the world affiliated to WSKF (Japan) and their respective web site or Facebook links: