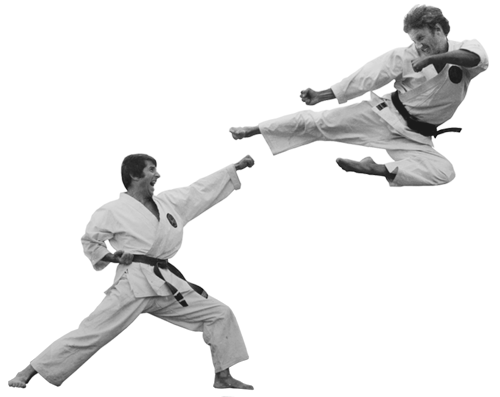 Many may consider karate as a somewhat mysterious art with its origins from Japan and Okinawa and whose participants perform almost superhuman acts such as breaking wooden boards or bricks with a powerful strike or piercing a watermelon with the fingertips. However these are but a very small part of karate (or more correctly karate-do) and in fact over time the study of karate achieves more in a spiritual (or mental) sense than a physical one.

There are numerous martial arts in existence. Some rely on kicking techniques, others may use grappling techniques or joint locks whilst other rely on throws to subdue an opponent. In a succinct way, karate could be considered as a weaponless means of self defence consisting of dynamic offensive and defensive techniques using all parts of the body to their maximum advantage. Karate students will use powerful kicks and dynamic punches and strikes to attack, strong blocking techniques to protect themselves and take-downs, throws and sweeps to immobilise their opponent. In essence karate practitioners will have a wide range of kicks, strikes and punches in their arsenal using many parts of the human body and all done without weapons. Karate training itself consists of three components: 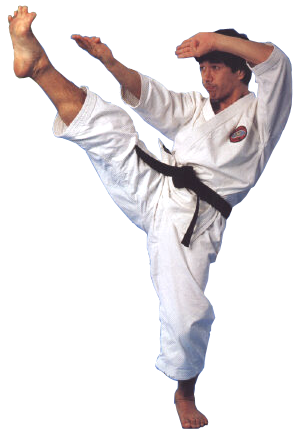 Kihon are the basics . . . the fundamentals that must be studied and trained constantly. In a nutshell kihon is the practice of individual punches, strikes and kicks and then applying them in combinations of two, three or more. In all serious karate styles, kihon are practiced continually by all levels of practitioners.

Kata, or forms, are pre-arranged “patterns” of movement done individually. They are a collection of kihon (basics) that are performed at a certain rhythm with elements executed at varying levels of power and speed. Kata could be considered a “showcase” of ones karate and are closely linked to kihon. In our style of shotokan karate a total of twenty five kata are practiced. 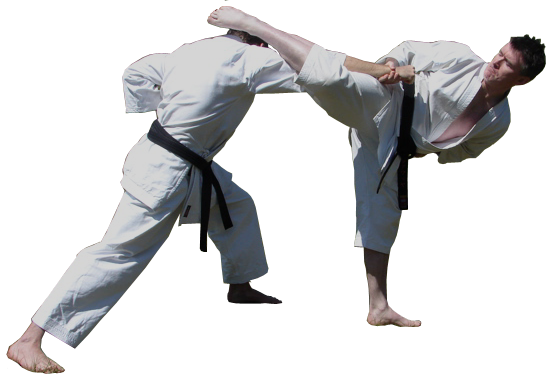 Kumite translates to sparring and is practiced with one or more partners. There are many levels of kumite starting for beginners with a simple five step sequence using a single punch with a corresponding block and counterattack. At the other end of the scale we practice free-fighting or jyu kumite and this is a test of ones techniques, speed and overall karate ability and is not practiced until a student has a good understanding of the more basic types of kihon.

The name “karate-do” is in fact made up of 3 Chinese characters – “kara” translated to mean empty, “te” meaning hand and “do” meaning the way or path one follows. Hence karate-do translates out to mean the way of the empty hand and at a superficial level, this relates to its practice of not using weapons. Karate-do in the West is usually referred to as simply “karate” but use of the suffix ‘do’ adds a further depth to the overall meaning and relates to the fact that karate is something you carry with you and apply its principals and philosophies to your everyday life. A more in-depth article about this aspect of karate-do can be found on our website HERE.

There are a great number of karate styles from which one can choose – Goju Ryu, Shito Ryu, Wado Ryu etc and each of these sees numerous splinter organisations within them and each may have its own methods and philosophies as passed down from instructor to student. Mainstream Shotokan Karate (which is what we follow in all WSKF clubs in Australia) tends to follow the style that originated via Okinawa and through to Japan over hundreds of years. Our style follows this Japanese way of karate and provides a martial art, and a sport, that can be started at any age and continue right through one’s life.

So what is karate?  Karate is an art, a sport, a system of self defence and a science. Consistent and conscientious study of karate gives one a way of life and leads to an amazing journey of self-discovery.